Participants can also be involved into two pre-workshop social events before the official start: a mountain hike and a Madrid visiting tour. Please get in touch with the Steering Committee for further info about these two social events.

A certificate of attendance will be given to those participants who have engaged in the workshop activities.

The updated schedule for WWCS2016 is the following: 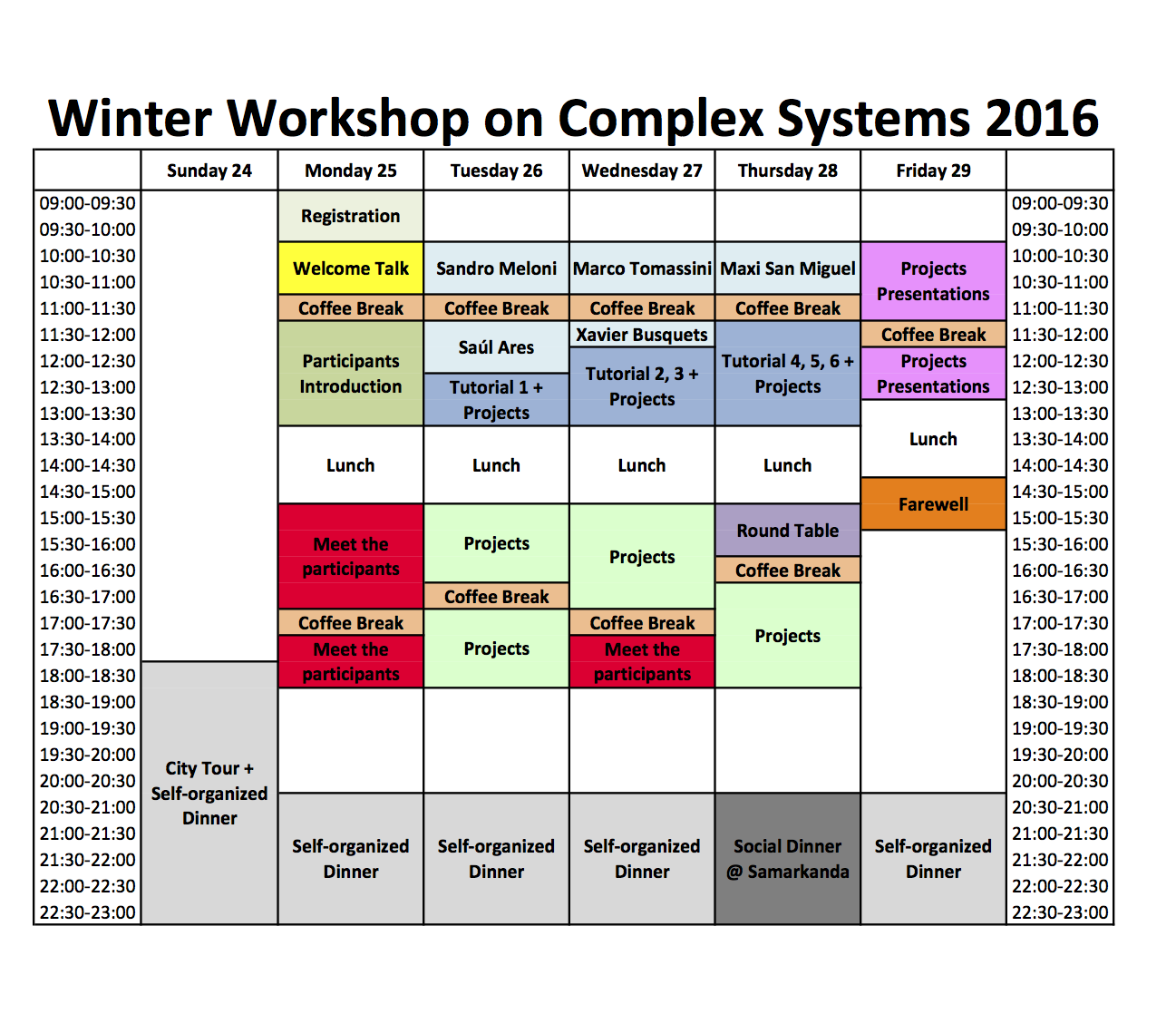 Participants will have the opportunity to give tutorials in their fields.

Many real-world complex systems are embedded in the geographical space. Examples include transportation systems, social systems, road networks, cities, and the Internet. The availability of rich geo-localised data and accessible tools  allow for increasing opportunities in understanding spatially-embedded socio-technical systems. The goal of this tutorial is to introduce the attendants to the use of some open-source free tools for the analysis and visualization of geo-localised data. I will propose an exercise starting from shared-bicycles trips data. First, we will perform simple measurements using Python tools. Then, I will show how to use the open-source software QGIS for visualizing the results on maps.

To follow the tutorial interactively, it would be better if  attendants have installed: ipython-notebook ( With the following libraries: pandas, numpy, matplotlib), QGIS and basemap.

The interplay of bistability and noise in interacting networks of epigenetic states.

Epigenetics describes phenotypical changes that come without changes to the DNA nucleotide sequence itself. Epigenetics can e.g. manifest itself in DNA methylation, i.e. chemical binding of a methyl group to the cytosine nucleotide within the cytosine-guanine dinucleotide sequence C-G. These C-G sites are found to cluster in the genome into regions of high densities of C-G sites, termed C-G islands. Interestingly, The C-G’s within C-G islands are often found to be either all methylated or all unmethylated, while intermediate configurations are rare, suggesting a bistable mechanism. Indeed, biological evidence points to interactions, where the methylation state at one C-G site can influence that at another, implying a spatially interacting system of sites, most generally described as a network. Importantly, C-G islands are frequently found in the proximity of gene promotors and their methylation state has been associated with gene expression. We will discuss how bistability can be brought about, and how noise, always present in biological systems, can cause transitions in such correlated systems.

Degree-based graph construction and sampling is a ubiquitous problem in network modeling, ranging from social sciences to biochemical reaction networks in the cell. This problem includes existence, enumeration, exhaustive construction and sampling questions with aspects that are still open today. To answer those questions, it is crucial to construct all possible simple graphs with a given arbitrary degree sequence.

In this tutorial, I will present my theorem and algorithm that can construct all possible labeled graphs with a given degree sequence. I will also introduce an algorithm developed based on my theorem, which samples graphs with known weights that allows us to do effective uniform sampling in terms of computing average of network observables.

Modelling the macro-dynamics and collapse of societies: theory, examples and lessons.

The tutorial will start by giving a short overview of the theory of societal collapse and the driving mechanisms for the rise of complexity in societies. The theory behind collapse is not well known but gives genuine insight on general complex systems. Some important modelling examples will be given that have similar aims in terms of the modelling objective but very different methodologies. These are meant to give a practical flavour for the modelling and an IPython notebook is provided that implements the models using the PyDSTool. The simplest way to get everything you need to run the notebook is to install the Anaconda distribution (Python 2.7). Finally, lessons are drawn that highlight the best modelling practices, especially when dealing with social systems and the use of differential equations.

Within the last decade, self-organization of patterns has been considered in networks, where reactions occur on the network’s nodes and diffusion is carried out through the links connecting them. Such systems can be formed by diffusively coupled chemical reactors, biological cells or dispersal habitats. The rapid development in network science provides increasing insight into the impact of their topology upon the emerging collective dynamics. A variety of self-organizing phenomena has been studied in such complex systems including epidemic spreading, synchronization and chimera states, stationary Turing and self-organized oscillatory patterns, etc. Collective phenomena induced by feedback control or by noise have also been analyzed in networks.

Here we attempt to discuss methods and tools for the analysis and visualization of those self-organized patterns by considering some classical examples of active networks. For this purpose we are going to use IPython Notebook for interactive computing and make use of the packages: scipy, numpy, matplotlib, networkx, multinetx (https://github.com/nkoub/multinetx). Participants may download the notebooks from http://nikos.techprolet.com/tutorial-5-for-wwcs2016 and modify them according to their needs, so that, they will contribute to the discussion presenting other networks or different self-organized patterns.

Tutorial 6 – Thursday 28 – 30 min slot – from 12.30 to 13.00 – Manlio De Domenico
.
Visualisation and analysis of multiplex networks
.
The recent explosion of interest in multilayer networks, i.e. networked systems where nodes might exhibit different types of relationships simultaneously, led to the development of a wide variety of theoretical and numerical tools for their analysis. In practice, researchers interested in performing a comprehensive analysis of such systems will face the problem of developing ad hoc code or to use existing ones, often written in a variety of (non-familiar) programming languages.
In this tutorial, I will show how to overcome these issues by using muxViz (http://muxviz.net/), the platform I have developed to analyze and visualize multilayer networks. I will perform the full analysis of an empirical multilayer network, including layer-layer correlations, structural reducibility, centrality, community detection and basic visualization(s).
MuxViz is a free and open source platform which does not require programming skills to be used. It already counts on the support of a growing community of 120+ passionate students and researchers worldwide. This tutorial will be a great occasion for interested attendants to learn how to use muxViz and/or to propose additional features, as well as a great occasion for me to get precious feedbacks about current and future developments.